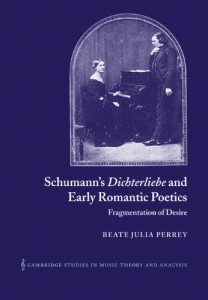 A complete study of this most famous and enigmatic Romantic works, Beate Julia Perrey offers a whole new theory of Romantic song via the poetics of Early Romanticism in order to understand the mysterious magnetism and singular imaginative energy that imbues Schumann’s musical language.

Close readings of many songs from Dichterliebe show the singer’s intense involvement with the piano’s voice. Seeing Schumann as the ‘second poet of the poem’ – here of Heine’s famous Lyrisches Intermezzo – this book explores essential issues of musico-poetic intertextuality, introducing into musicology a hermeneutic that seeks to synthesize philosophical, literary-critical, music-analytical and psycho-analytical modes of thought.

“One of the best introductions available on the nature of romanticism as a literary, cultural and musical phenomenon”

“A sustained, deeply sensitive, intellectually bold and ambitious study. We will all walk a little taller by climbing on the shoulders of Perrey’s work.”

“Some of the most rewarding writing in contemporary musicology.”

“A book that will produce a shift in how people think.”

“Perrey’s analysis is nothing short of exciting. Systematic, well researched, and beautifully written [it is] an excellent study in music-text relationships and highly recommended.”

“Perrey’s interpretation will undoubtedly spark a healthy debate…. And her ideas about Schumann’s creative-critical readings of Heine will surely inspire new hearings of not only Dichterliebe but Schumann’s other Lieder as well.”

“A refreshing and altogether new view of Schumann’s Dichterliebe.”

“A radical departure from conventional ideas about song cycles”

“An impressively original, well-researched, powerfully-argued and remarkable piece of work.”